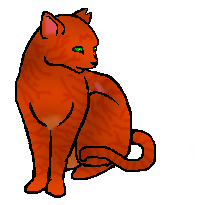 Firestar is a flame-colored ginger tom with emerald green eyes, and a scar on his flank.

Starting out as a kittypet with the name of Rusty, he starts his life in the luxury and comfort of a Twoleg home. When Rusty first learns of the Clans, the first things he learns are quite false. The Clan cats didn't eat bones, nor did they kill ruthlessly.

One day, when Rusty wanders into the woods, he first meets Graypaw. Following Graypaw is ThunderClan leader, Bluestar, and her companion, Lionheart. When seeing Rusty previously in the forest, the pair are interested in Rusty and want to know if he would make a good Warrior. Bluestar begins telling him of the Clans, and the hardships they are currently going through. ThunderClan is short of prey and warriors. Rusty seems to be listening intently on everything Bluestar says, and when she asks if he would like to join the clan, he is taken by surprise. He agrees to meet Lionheart the following day at sunhigh to let him know the decision he has come to.

He awakes the following day to see his friend Smudge, and tells him the adventures he had the day before in the forest. Smudge is shocked when Rusty tells him that they offered to let him in their Clan, and tells Rusty to not trust them; it sounds suspicious. Rusty tells him he does trust them, however, and he's decided to join their Clan. Smudge is taken aback and upset, but they decide to spend one last morning together.

When the time comes to meet Lionheart, Rusty is nearly shaking with excitement. He goes into the forest to meet the Clan cat, and is greeted with Lionheart and a different warrior, Whitestorm. He at first thinks this is a trap, but is wrong. The Clan cats tell him he has a lot to learn, and brings him to their camp.

Rusty is granted with the name of Firepaw for his blazing pelt. He becomes known as a mischievous apprentice, and has a few enemies. These cats are Longtail, Tigerclaw, Sandpaw, and Dustpaw. These handful of cats usually make fun of him for his kittypet roots, often muttering remarks as the days wear on.

Already before Firepaw becomes a warrior, he has his suspicions about Tigerclaw and what seems his loyal followers, Longtail and Darkstripe. A black apprentice who always seems worried, Ravenpaw, tells Firepaw and Graypaw that Tigerclaw killed Redtail, the previous ThunderClan deputy, in the battle for Sunningrocks with RiverClan.

When Firepaw and Graypaw become warriors with the names of Fireheart and Graystripe, they discover Tigerclaw's evil plans and put them to a stop. Tigerclaw was planning on killing Bluestar and using his rogue friends to distract the Clan. When the rogues were doing this, he headed to Bluestar's den to make the kill. Fireheart put a stop to this. Tigerclaw is exiled from ThunderClan and the forest. Bluestar couldn't believe how she was betrayed, and this eventually drives her mad.

Fireheart had learned of his sister earlier on, Princess, and one day when he went to greet her, she wanted him to bring her fluffy white kit to the Clans. At first, the Clan is dismayed, and eventually accept the white tom as they did Fireheart.

Fireheart, being a loyal and kind warrior, eventually earns his position as Clan deputy. He befriends Sandstorm, who seems to put his kittypet roots in the past, and the two become close. However, Bluestar is afraid traitors are around every corner, and even claims the whole of ThunderClan are traitors. Being the new deputy and having to deal with a mad leader puts a lot of stress on Fireheart, especially with Tigerclaw being now known as Tigerstar; the new leader of ShadowClan. Suddenly, when one apprentice dies and another injured greatly due to an unknown cause, everything turns for the worse. Tigerclaw has been leading a trail of prey to ThunderClan camp in order to get his revenge. By doing this, this will attract the wild pack of dogs that have made their home in the nook of the forest, not far from ThunderClan camp. The whole Clan must work together in order to put a stop to this threat that can destroy the Clan.

When the dogs are chasing Fireheart, he leads the dogs down the ravine to their deaths, a dog grabs Fireheart in it's jaws. Bluestar, who was nearby, charged into the dog, sending them both off the cliff. Fireheart saves her, along with the help of Mistyfoot and Stonefur, who had learned not long ago that Bluestar was their true mother. Before Bluestar joins StarClan, she tells Fireheart he will be the light of ThunderClan, and praises him. Fireheart is now Firestar, the leader of ThunderClan.

Later, Tigerstar invites BloodClan, led by Scourge, into the forest to attempt to force the Clans to join together under his leadership. Firestar exiles Darkstripe for his treachery after feeding Sorrelkit death-berries.

However, during this meeting, Tigerstar is murdered by Scourge. Scourge wants the forest, and tells the Clan cats they will have to fight if they wish to keep it. The Clans join together under the name of LionClan with Firestar leading them into battle. Although bloody, the Clans are victorious, with few deaths and only one life lost from Firestar. Scourge is killed, and it seems the forest is peaceful once more.

Twolegs start intrude on the forest, destroying the land. Prey is so scarce, most of the Clan is starving. Firestar's daughter, Squirrelpaw, disappears, along with Brambleclaw. Since Cinderpelt told the prophecy of Fire and Tiger, Firestar tried to keep the two away from each other, but it seemed he had failed. When the two return, he is grateful; the Clan's territory has been wiped out, and the cats had to move to another piece of land in their territory. They tell Firestar the news, that the Clans must find a new place to call home.

After the Clan leaders agree to leave, and that it's the only choice, Firestar leads them to their new home. The journey is harsh, and they make it with only a handful of lives lost.

At this point of the series, Firestar becomes less of a main character, and the focus is mainly put on Squirrelflight and Leafpaw, his two daughters. However, he still leads ThunderClan, trudging ahead and bravely settling his Clan in their new territory. Under his leadership, his Clan settles in their new camp safely.

Retrieved from "https://lostinthewarriorsworld.fandom.com/wiki/Firestar?oldid=5641"
Community content is available under CC-BY-SA unless otherwise noted.